AUDIO ONLY - No Video
This is the YouTube version of the Aviation News Talk podcast, hence there's no video.
You can subscribe to the podcast in the Apple Podcasts app here: https://podcasts.apple.com/us/podcast/aviation-news-talk-podcast/id1223782070
or wherever you get your podcasts.

Summary 214 Max talks with Rob Mark about the San Diego Learjet Crash in El Cajon, and early clues that this landing wouldn’t succeed. The air ambulance flight crashed in poor weather, after canceling IFR, as required at night to land on a longer runway. A poorly flown traffic pattern at low altitude sealed their fate. Max and Rob asked pilots to think about when they would have diverted, if they were flying. N880Z, a Learjet 35A, crashed while landing at night at Gillespie Field in El Cajon, north of San Diego. The crash was where the base intersects the final, which is a classic location for stall/spin accidents. The aircraft flew a traffic pattern that was lower and farther east than usual, and they were headed straight for Rattlesnake Mountain, which was a couple hundred feet higher than the aircraft. The aircraft crashed about 0.1 miles from the base of the mountain on Pepper Drive. There were no survivors.


The air ambulance flight originated from John Wayne Airport, which was a short, 18-minute flight to Gillespie. The weather at the time was at VFR minimums and IFR minimums for circling. The weather was 3 mile visibility with mist and a broken layer of clouds at 2,000 feet and an overcast layer at 2,600 feet. The two-pilot crew flew the RNAV (GPS) 17 approach, which has LP minimums of 1,360 feet, for a straight in landing to runway 17. However runway 17 is more than a 1,000 feet shorter than runway 27R, and when the aircraft was approximately 3 miles north of the airport, they cancelled IFR and requested to land on runway 27R. Circling to runway 27R is not permitted at night when flying IFR, which is why the crew cancelled IFR, so that there were legally permitted to land on 27R.

The aircraft crossed overhead the airport very low at 725 feet, less than 350 feet above the field elevation of 388 feet. The aircraft then climbed to 950 feet in a left traffic pattern to 27R. The aircraft flew a traffic pattern that was farther north and east than their prior circles to runway 27R. This resulted in them flying directly toward Rattlesnake Mountain. 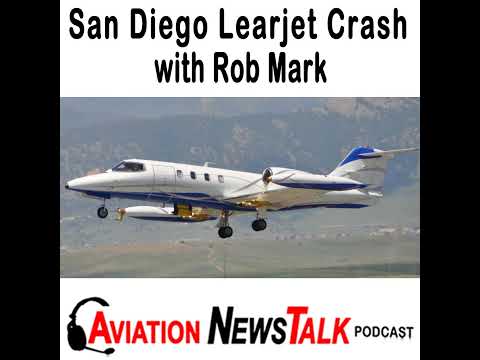 AUDIO ONLY - No Video This is the YouTube version of the Aviation News Talk podcast, hence there's no video. You can subscribe to the podcast in the A...