2022 is the Year of the Gaming Buyouts! Sony Buys Bungie in MAJOR Deal

Subscribe For Daily PDS News Clips: https://www.youtube.com/c/roguerocket?sub_confirmation=1
Go to https://public.com/defranco and you’ll receive a Free stock once you open an account and deposit. This is a paid endorsement for Open To The Public, member FINRA & SIPC. This is not advice. Investing involves risk of loss. Regulatory & firm fees apply.
Watch The Full DeFranco News Show: https://www.youtube.com/defranco?sub_confirmation=1

It’s looking like for gaming, 2022 may be remembered as the year where everything was consolidated. Right, just barely a week or so ago we talked about Microsoft buying ActivisionBlizzard for tens of billions of dollars. And now it was just announced that Sony is buying Bungie for $3.6 billion. For those that don’t know, Bungie makes Destiny, which is a pretty popular MMO game. But its original claim to fame was as the makers of Halo until Halo: Reach. And in the gaming world, that’s a seriously solid resume. Sony buying Bungie isn’t particularly shocking, as Sony is already the world’s second largest player in the gaming space after Tencent. Bungie’s CEO seemed pretty excited about the merger, saying in a statement: “In [Sony Interative Enteratinment], we have found a partner who unconditionally supports us in all we are and who wants to accelerate our vision to create generation-spanning entertainment, all while preserving the creative independence that beats in Bungie’s heart,” “Like us, SIE believes that game worlds are only the beginning of what our IPs can become. Together, we share a dream of creating and fostering iconic franchises that unite friends around the world, families across generations, and fans across multiple platforms and entertainment mediums.​ Obviously, a buyout by Sony has led to questions to over whether Bungie games will largely be confined to the PlayStation. However, according to an FAQ about the deal, it was clarified that won’t be the case. This is still pretty fresh news as of recording, but one thing I can think of is that it may have unwittingly helped Microsoft out. Right, there were concerns after it announced its intention to buy ActivisionBlizzard that it would face some serious regulatory scrutiny and anti-trust measures. But it can now point out that it still only remains the third biggest studio, and that other players in the game are able to successfully operate and buy out competitors without issue. But with that, do you think this a good thing? Like, will it give more resources to Bungie to develop games, Or do you think that it ultimately hurts the gaming space to have more developers stuck under parent companies?

2022 is the Year of the Gaming Buyouts! Sony Buys Bungie in MAJOR Deal 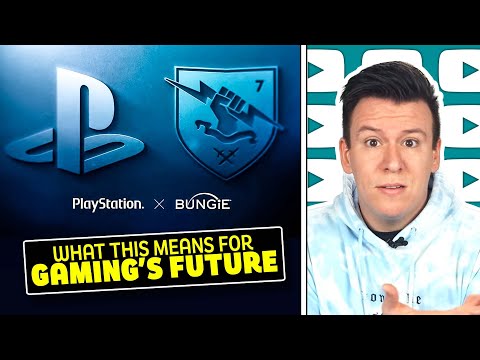