Jothe Jotheyali is a kannada serial telecasting in Zee Kannada..

Hello viewers I am not expert in English,so please forgive me if you find any grammar mistakes in this narration..

Firstly here Arya says to Anu that jalandhar chapter was closed,it's bcoz of your plan only..it's really a master plan nu,I won bcoz of your plan,do you know Anu actually jalandhar put a gunpoint to me,how could I leave him...from today onwards there is nobody will come in between us,so I wished you independence day, further asks a hug from her,but Anu staring at him,so Arya asks did she not feeling happy..?? so Anu went from there by saying she have to give tablets to sharadadevi...after this Arya thinks did Anu doubted me...here Anu came to sharadadevi room while she is sleeping Anu sent a msg to Ramya to meet morning...next day sharadadevi saw Anu wearing a Rajanandini's bedsheet and shocks at the same time Anu got up and asks what's happened...so sharadadevi says this bedsheet belongs to rajanandini,I searched it before, where did you get it...so Anu says I searched for a bedsheet to wear but I got this one..so sharadadevi says it's ok...here in office jhende asks we finished a one and only enemy we have,why are you standing in sad face...so Arya says he need to get Anu's trust bcoz her look is not like before when we both love each other further says she is not enjoying my victory and not having love and care about me,I need to gain same trust from Anu means I need to do something urgently...so jhende says he can't understand his words further questions for your talent and your name you can create a separate nation but why you are sticking to this vardhan group,so Arya says just bcoz it's all mine,so I won't leave this...after this Meera asks shall I come in,Arya says yes but Meera once again asks are you sure sir,so Arya asks why she is asking again..?? so Meera says she is just double checking than says some works in Rajanandini dept.was in hold,so Arya says Anu won't come to office if it is urgent you can go to home and also it will be fine if you talk with mom also than says earlier you are visiting my home weekly twice but now you are not coming to home,why Meera..?? so Meera asks once again did he tells to visit his home,so Arya says are you double checking this also,so Meera says it's meant a lot to me sir and thanks him than tells to jhende to come outside bcoz she have to update about something and went from there...so jhende came to Meera and asks what Meera ji...so Meera remember that jhende used singular words against Arya in her home than questions who are you jhende,where are you from..?? what is the relationship with Arya sir..so jhende says I am not as talented you,I don't know how to answer for your question,I am just an employee in this office,by hearing this Meera says it's not looks as you says jhende further says there is some equation between you and Arya sir,by hearing this jhende says meeraji you have more works in this office,why are you wasting time on me,it's getting late you can move to Arya sir's house and went from there... 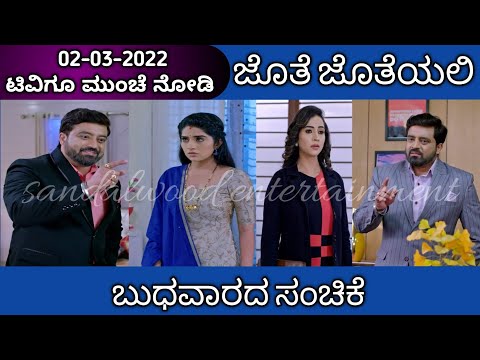 Jothe Jotheyali is a kannada serial telecasting in Zee Kannada.. Hello viewers I am not expert in English,so please forgive me if you find any grammar...